After the murder of George Floyd and Brianna Taylor by their local police departments, I collaborated with data researcher Mason Youngblood on an in-depth statistical analysis of municipal funding of law enforcement for an article in Sludge.

Most notably, we found that American cities dedicate an average of one-third of their general fund to their police force. The majority of this money goes to personnel. We also found that the size of the police budget relates inversely to median income, Gini index, and Democratic voting. 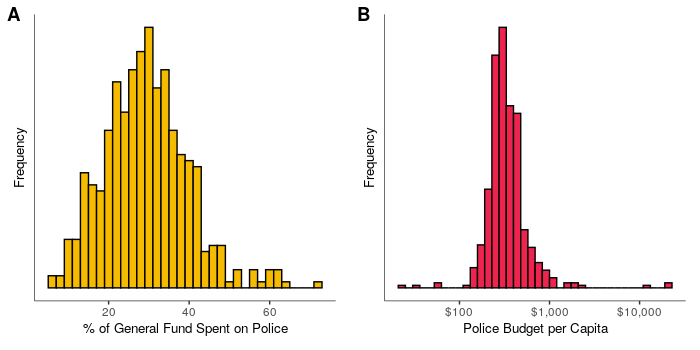 The frequency distributions of (left) the percent of the general fund spent on police, and (right) police budget per capita.

For our research, we collected publicly available budgets for 473 municipalities. We chose locations with an informed random strategy, starting with cities that held George Floyd-related protests and filling in demographical gaps as we noticed them. To our knowledge, our data is the largest set of such data currently available.

READ THE FULL ARTICLE AT SLUDGE